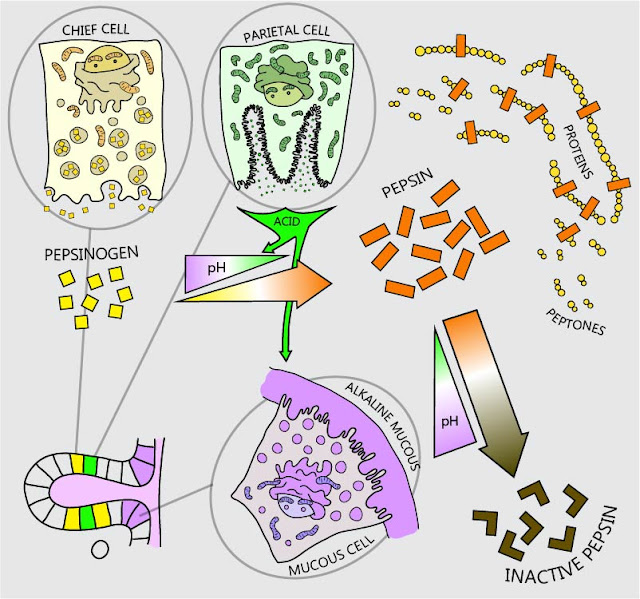 A brief summary:
– Inside the stomach, protein is broken down by the enzyme pepsin into smaller pieces, called peptones.
– Pepsin is derived from pepsinogen, which is made by chief cells in the stomach lining.
– Stomach acid made by parietal cells in the stomach lining transforms pepsinogen into pepsin and creates an acid environment to optimize the function of pepsin.
– The stomach lining is protected from stomach acid and pepsin by a layer of alkaline mucous made by mucous cells. The alkaline environment neutralizes the acid and inactivates the pepsin.
I will continue to discuss what other cell types and systems influence this proces. An important concept when studying the body is its ability to selectively activate or inactivate processes involved in maintaining a physiological balance (homeostasis). The body changes constantly and it is therefore required to compensate for outside (and inside) influences to maintain homeostasis. Homeostasis means maintaining an internal environment that is optimized for the body at that time. To this end, most critical processes are regulated to stay within tight boundaries. As the environment changes, however, these boundaries will change accordingly as well. And as the balance for any one factor falls outside of these boundaries, the body will act to return to a balanced internal environment. Homeostasis in an unconscious process, managed and monitored by the brain and nervous system.
The on-switch for the stomach is therefore also neurological. As soon as you see something to eat, smell something to eat, taste, chew and swallow, the stomach is made ready to digest. The autonomic nervous system has already sent a general signal to start digestion, since it knows that food will be/is being/has been eaten. The stomach starts producing acid and pepsinogen to initiate digestion, as well as extra mucous to protect itself.
Food entering the stomach provides an additional signal to promote the production of acid and digestive enzymes. 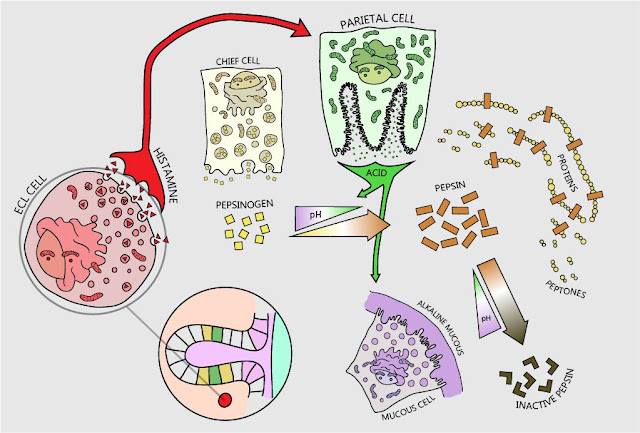 ECL cells (EnteroChromaffin-Like cells) are located close to parietal cells, but behind the layer of epithelial cells in the stomach lining (so they are not in direct contact with the stomach content). ECL cells produce histamine, which they release into their immediate environment. Parietal cells then produce more acid when they notice the presence of histamine.
ECL cells are so-called endocrine cells, because they release (crine) histamine inside (endo) the body, whereas parietal and chief cells release their product on the outside (exo) of the body. Technically, any part of the body that is not behind a layer of epithelium is internal. The digestive tract is technically a single long tube, which is lined by epithelium of some kind and is therefore considered external to the body.
Histamine may be familiar to some in a different context. Histamine is an important messenger for the immune system en is the main cause of allergic symptoms. Generally speaking, histamine signals for an increase in inflammation. But in the stomach it appears to have a different function.
Brief summary: ECL cells produce histamine, which makes parietal cells produce more acid. ECL cells therefore indirectly increase the acidity of the stomach content. 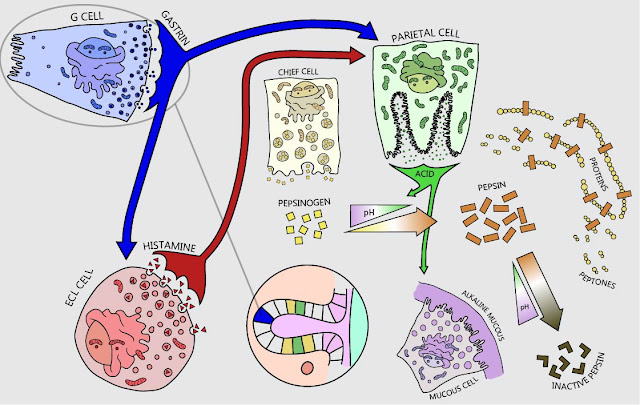 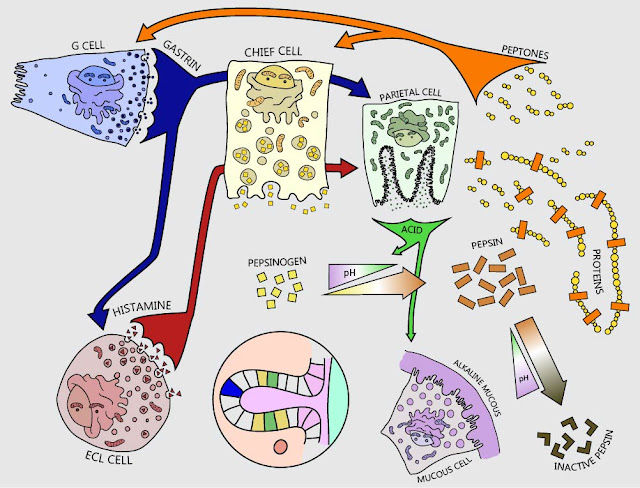 Once protein digestion has started, a positive feedback loop kicks in. A positive feedback loop occurs when the result of process enhances the process it resulted from, effectively amplifying it. In this case, peptones (the small protein fragments) stimulate G and chief cells. G cells produce more gastrin, which increases acid production and chief cells produce more pepsinogen. Pepsinogen in the acidic environment becomes pepsin and breaks down more proteins into peptones, which amplifies the peptone signaling. This loop remains active as long as peptones are present. As soon as the stomach content is sufficiently digested, it will move on to the small intestines, thereby breaking the feedback loop. 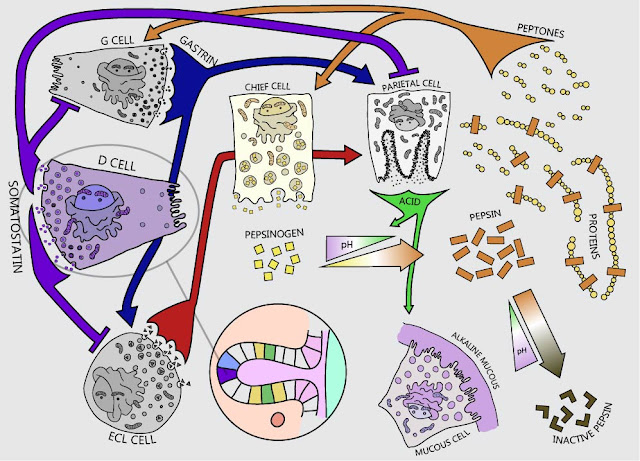 The body regulates most processes at multiple levels. In the stomach, the second type of endocrine cell, D cells, provide more regulation for stomach acid production. D cells make somatostatin (Greek for: halting the body (or something like that)). D cells do very little when digestion has just gotten started, but start producing somatostatin once the pH gets lower and more gastrin is made by G cells. Somatostatin inhibits (stops) ECL, G and parietal cells from producing their products and thereby reduces the amount of acid that is being made directly and indirectly. Stronger activating signals for D cells result in higher amounts of somatostatin being released. This is known as a negative feedback loop, where the result of a process, inhibits that process.
Somatostatin is also made by cells in the small intestine (duodenum) as response to a lower pH when the stomach content gets enters the small intestine. Endocrine release of somatostatin can be transported by blood to provide signals elsewhere in the body, not just the immediate environment around the endocrine cell.
A final regulation of stomach acid, as mentioned before: the entire stomach is under the control of the nervous system, mainly the parasympathetic branch of the autonomous nervous system. This branch promotes digestion and rest. It used acetylcholine, locally made by nerve endings, to communicate with the stomach. Acetylcholine stimulates cells that produce digestive enzymes and acid, but it inhibits D cells. Given the effect of somatostatin produced by D cells, the inhibition of D cells by acetylcholine in this context, makes sense, since it results in more digestion. Of course, the inhibition of D cells by the nervous system can be overcome with sufficient stimulatory inputs. 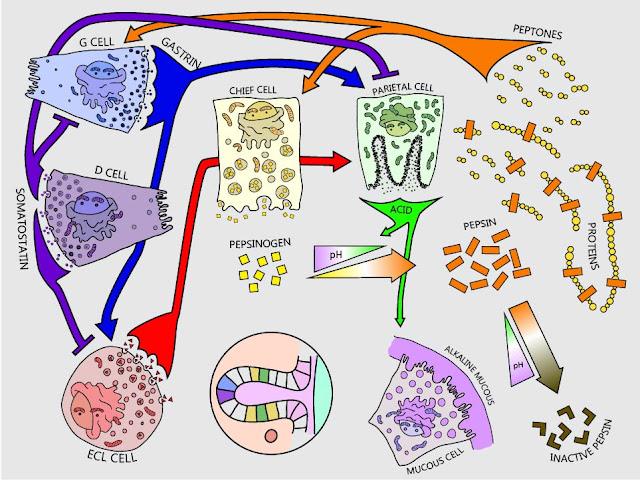 That is some of the information I gathered from my book on human physiology regarding stomach acid regulation and protein digestion. My book is at least 5+ years old by now and mentioned that several unknown cells and signals are also suspected to affect the stomach. And, of course, my descriptions are simplified for your understanding ;).
Regardless, I hope you can now appreciate a bit more of the complexity involved in a seemingly simple process. This is a common theme, in my experience, when studying anything in-depth.

This site uses Akismet to reduce spam. Learn how your comment data is processed.