END_OF_DOCUMENT_TOKEN_TO_BE_REPLACED

In this article I will discuss the basics about cholesterol and the other cholesterol. We will make the distinction between the molecule cholesterol and cholesterol in the sense that most people know it, what traits of cholesterol are most relevant for maintaining optimal health and how you affect your cholesterol. This article will be part 1 of a two-part series, the second part going into more depth about atherosclerosis and how lipoproteins play a role in cardiovascular disease.

END_OF_DOCUMENT_TOKEN_TO_BE_REPLACED

This is part three of the miniseries about macronutrient uptake. This time, I will discuss the break-down and uptake of fats. This blogpost will be longer than the previous ones, because fat absorption is far more complex that absorption of carbs and proteins. I made more figures to compensate for this and tried to cover all the critical concepts as best I could. Like last time, this information can be found in the book ‘Medical Physiology’ by Boron & Boulpaep, 2nd edition. My goal in this post was to let the figures speak for themselves and add as little extra text as possible. I hope you will let me know if I succeeded :). The text in the blog will not always be needed to understand the figures, but is mainly some extra information for those interested in it.
Take note: It will be useful for your understanding to have read the previous post on protein and carbohydrate digestion and uptake, since I will be using the same method of depicting things like salt ions and enzymes. 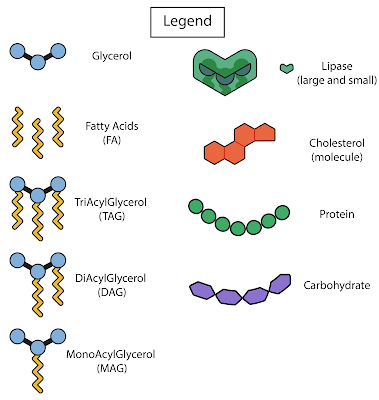 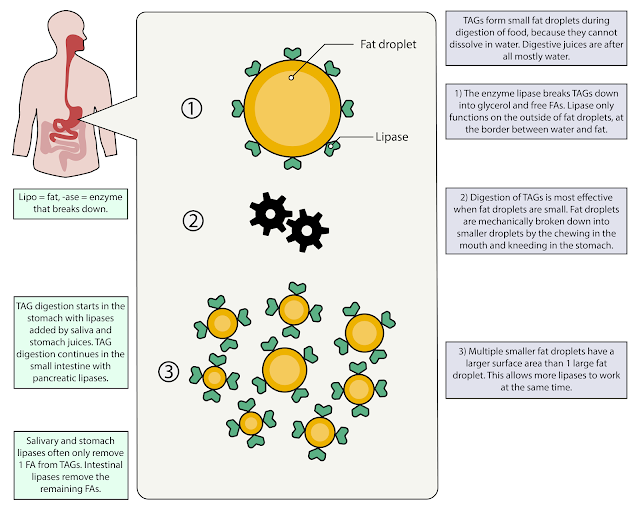 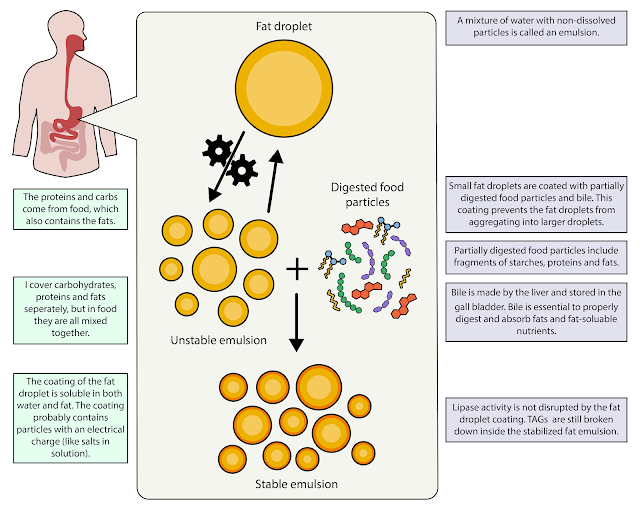 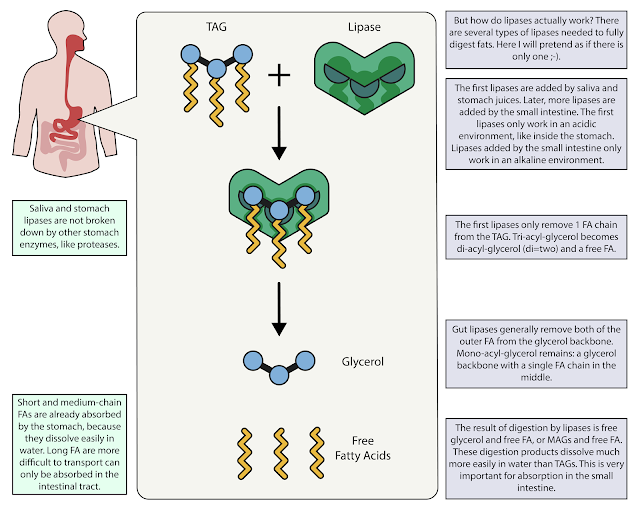 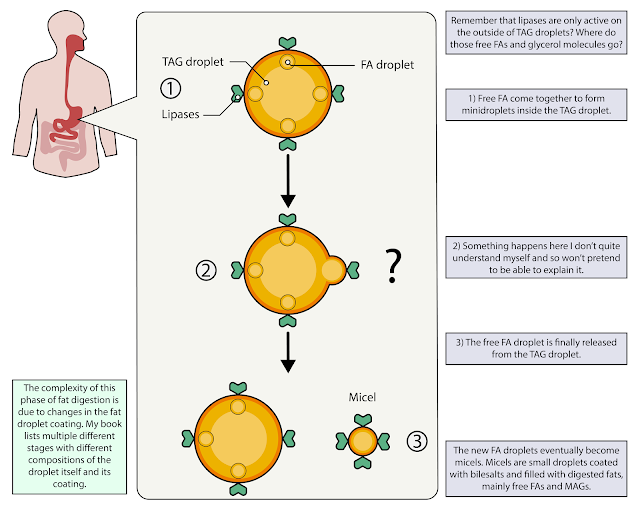 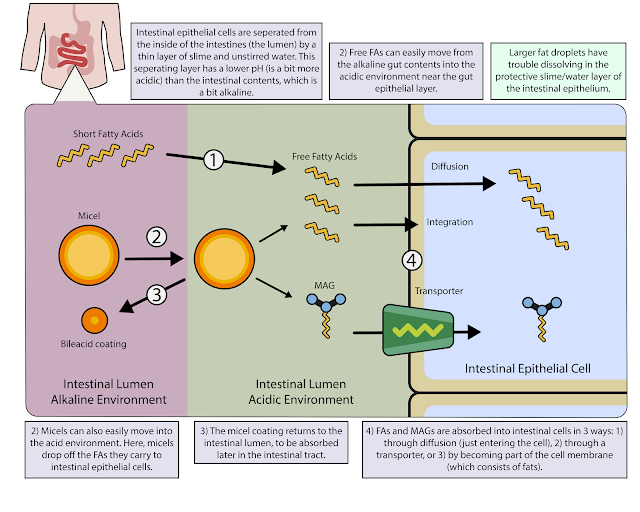 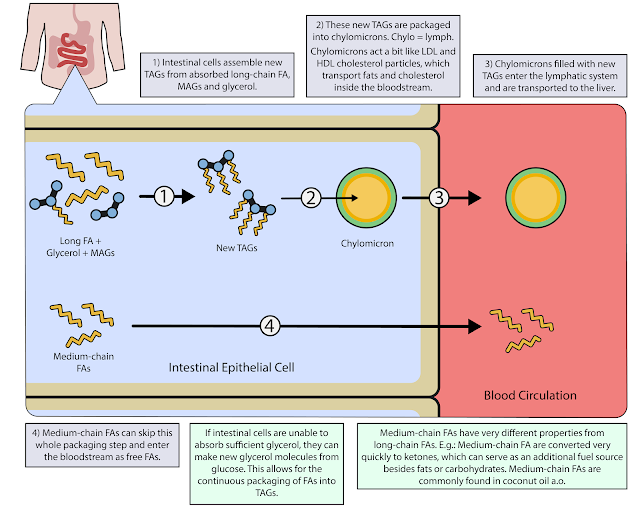 And that’s all I can reasonably explain about the basics of fat digestion and absorption while still keeping it basic. With that, I have covered the absorption of all 3 macronutrients (the basics of it, at least)! YESSS! The next blogpost will be: MORE BASICS, because I like to know that stuff. After all, you are probably dying to know what happens after the macros have been absorbed. That’s when the real fun starts (and things get complicated … mostly complicated, so extra fun! (for me, maybe not for you (to bad ;-p)))!

18 June 201718 September 2017 Dagmar 0 Comment Biology Blog Basics, Digestion
This is part two of the miniseries about macronutrient uptake. This time, I will discuss the break-down and uptake of proteins. Like last time, this information can be found in the book ‘Medical Physiology’ by Boron & Boulpaep, 2nd edition. My goal in this post was to let the figures speak for themselves and add as little extra text as possible. I hope you will let me know if I succeeded :). The text in the blog will not always be needed to understand the figures, but is mainly some extra information for those interested in it.
Take note: It will be useful for your understanding to have read the previous post on carbohydrate digestion and uptake, since I will be using the same method of depicting things like salt ions and enzymes.
I forgot to mention in my previous post that the purple-tinted text blocks contain the most important information for understanding the process of protein digestion, while the green-tinted text block are extra, containing some facts that are not essential. For those people who would like some more depth. 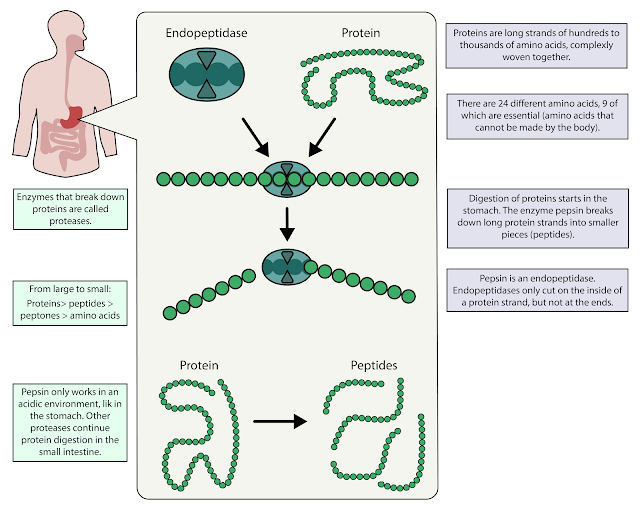 Proteins can be found in almost any type of food, unless it has been highly processed. Both plants and animals make proteins. Actually, all living organisms make proteins (with the exception of viruses, but you could argue viruses aren’t actually ‘alive’). 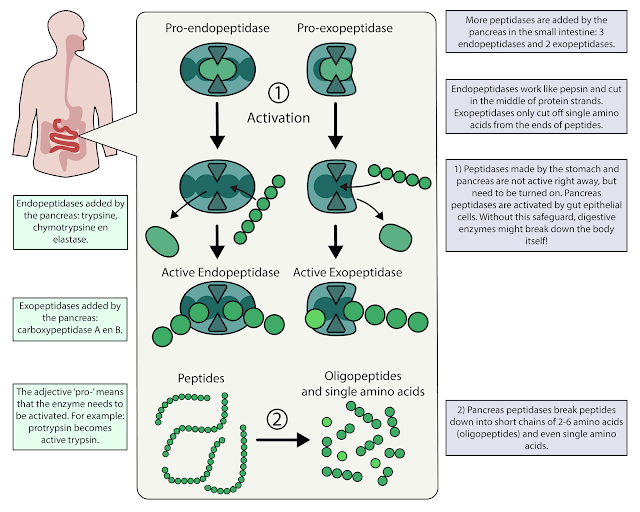 For more info on pepsin: read the post about stomach acid regulation. (Basics – Advanced)
Pro-enzymes can often be activated by their already-active forms. For example: propepsine can be turned on by pepsin. This will cause an amplifying reaction: more active enzymes will activate more enzymes, which will activate more enzymes etc. This is called a positive feedback loop: the result of the reaction will stimulate the reaction.
A fact about trypsin: this enzyme is often used in laboratories when culturing cells (I know this from personal experience). Cells are cultured in dishes or flask. Some cells float in the medium (culturing liquid), while others stick to the bottom. Cells that stick to a surface can easily be released by adding trypsin. Trypsin cuts the anchors on the outside of the cells, which causes the cells to release from the dish or flask. Cells don’t really like this, so it is best not to do it too often or for too long. 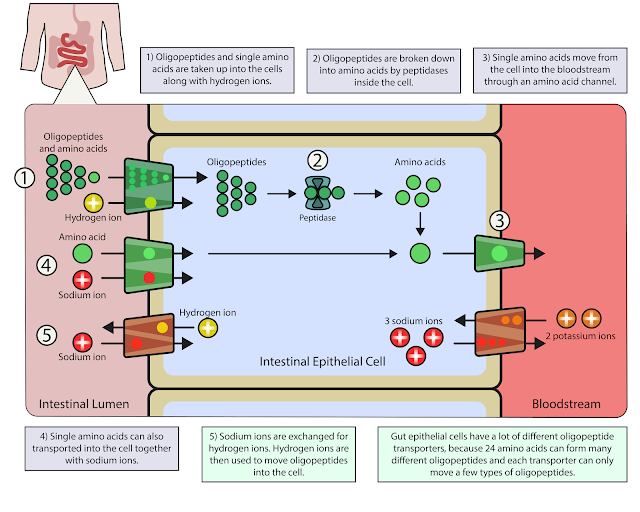 Salt ions drive the transport of oligopeptides and amino acids. This transport mechanism is used a lot by the body, so it is very important to understand it well. Please let me know if this is still unclear, so I can provide a better explanation of the mechanism if needed.
Unlike carbohydrates, proteins don’t need to be digested entirely to be absorbed by gut epithelial cells. This is due to oligopeptide transporters. According to Boron & Boulpaep, it is more efficient and faster for cells to take up 2-4 amino acids at a time as oligopeptides than to take up the same amount of amino acids individually.
The next and last post in this miniseries will cover the break-down and uptake of fats (my energy source of choice 😉 ). Of course I safe the best (and most complex) for last! This is part 1 of a 3-part series about how the three macronutrients (carbohydrates – proteins – fats) are absorbed by the body. Here I explain how digestive enzymes break down food and how the intestines take up nutrients into the body. The textbook ‘Medical Physiology’ 2nd edition by Boron & Boulpaep is the source of this information.

The challenge of this series is to create complete figures that do not require much or any additional explanation. All essential info is listed in the figure itself in small text boxes. Interesting trivia or more detailed explanations are put in the blog post. 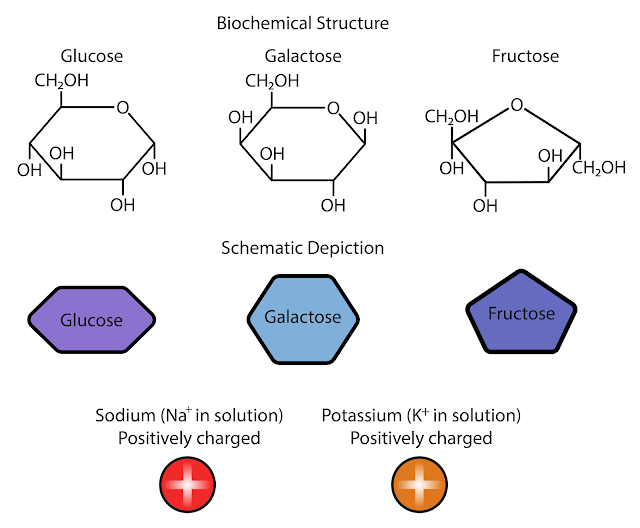 This is an overview of the different types of sugars commonly found in food and a legend of the schematic depictions thereof in the following figures. 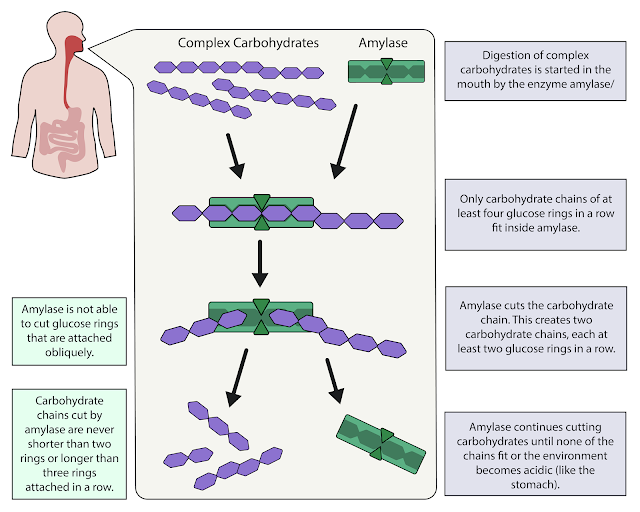 Complex carbohydrates are mainly starches from plants and glycogen from animal meat. They are long carbohydrate chains (much longer than depicted here). Depending on the source, they can contain a million carbohydrate rings. 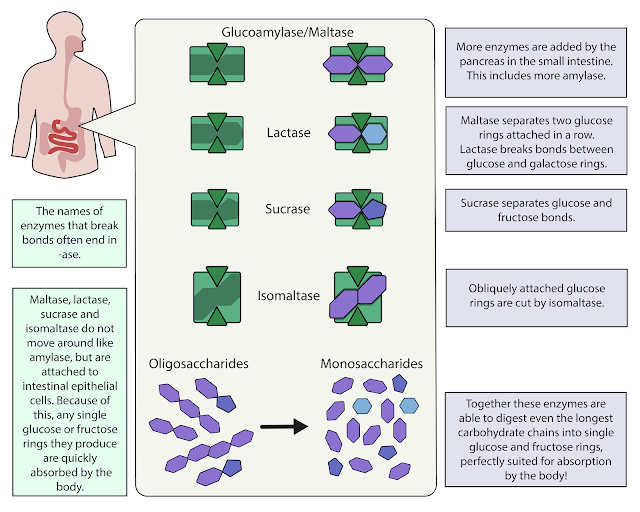 The prefix ‘oligo-‘ is use to indicate ‘a few’ (I am not sure what the exact definition is in this context). The ‘mono-‘ prefix means ‘one’, so a monosaccharide indicates a single carbohydrate ring. Complex carbohydrates are also called polysaccharides, where ‘poly-‘ means ‘many / a lot’.
The enzymes are named after the disaccharide (2 carbohydrate chains) they are able to cut. Lactase cuts lactose (milk sugar), which is made out of glucose and galactose. Sucrase cuts sucrose (table sugar), which is made out of glucose and fructose. 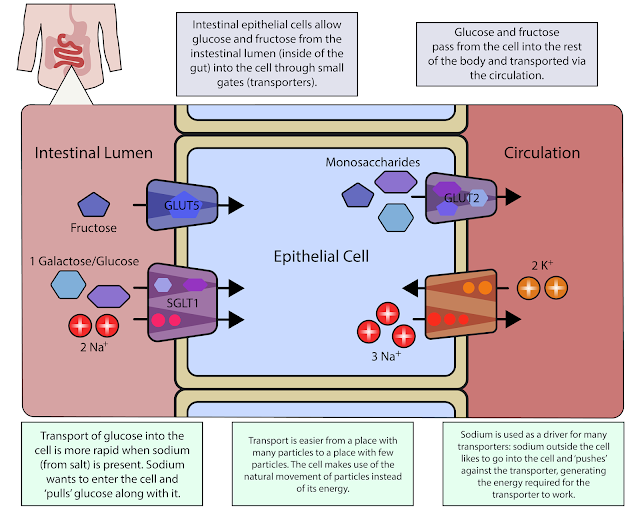 The use of sodium to improve the function of transporters is used in a lot of ways in the body, also for other transporters of other cell types.
BTW: the transporter that exchanges sodium and potassium (Na-K exchanger) is needed to empty the cell of sodium, so it can be used to facilitate the uptake of glucose from the intestinal lumen. Of course, there are many other transporters used by intestinal epithelial cells, but I will keep things simple here ;).
Part 2 of this series will be about proteins. In part 3 I will discuss fats.